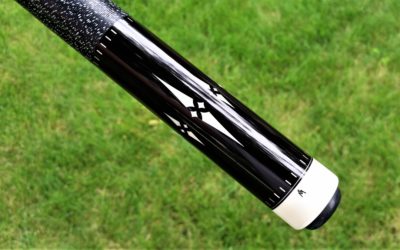 What a fantastic looking cue by one of the greatest cue makers ever. There is so much that can be said about Bill McDaniel, and cues that he has built. It all could really fill a book. His cues hit, and have been compared to some of the biggest named cue makers ever. This is an 8 point “All Original” cue in Pristine condition. Look at the figure in the Birdseye Maple. All of the white inlays are natural material. The ferrules and butt cap are linen. The shafts look like they are new and the tips appear to be original. This cue has the shorter steel joint that are so very popular now. Further proof of Bill being ahead of his time. All of Bill’s cues are also known for their flawless construction. Super tight inlays and perfect ring work.

Bill is retired now and this is as close as you will get to buying a new cue from him. You don’t see McDaniel cue coming up for sale often. And when they do, they sell fast.

“The McDaniel arrived safely. The cue is in excellent shape as shown in your ad. Thank you.”  Joe / South Carolina