Borana was born in Tirana Albania and moved to the United States when she was 10 years old. She came here with her parents and sister. As a child she attended LaGuardia Preforming Arts High School where she studied, and was trained in classical piano. She maintained a high GPA, was in the top 5% of her class and was a self-proclaimed “Nerd” in high school. Her parents did not have a piano at home to practice on so she is very grateful to the Bronx House Music School, which let her use one of their pianos to practice on after school hours. She still plays the piano every once and a while for her own enjoyment. She also attended Fordham College where she got her bachelor’s degree in finance and minor in mathematics. Her career is in the banking industry. She now lives in the Bronx in New York. Her nickname is The Killer B. It was the late George “Ginky” SanSouci who gave her this name. She is also known as Queen B. She spends a lot of her spare time at Castle Billiards Lounge, which is her main sponsor.

1: When did you start playing pool?

I started playing pool when I was a freshman at Fordham. I had a lot of time in between classes, and I used to go to the community room where there was a pool table. I had a lot of time in between my classes, like 2-3 hours every day, and I had no other way to spend my time so I got really caught up in it. Within a few months I was able to compete with the people who were already playing there. Then I met someone who was playing really well actually, and he introduced me to the leagues at Amsterdam. And, that’s when I started to get competitive. So, it was about a year after I was 18 in college that I got serious.

2: You have played in a lot of tournaments. Do any stand out?

Turning stone. I don’t remember exactly which one, but it was about 2 or 3 years ago, and I played on the stream. That was the first time I broke and ran out 2 racks in a match. That was when I knew I hit a new level of playing. I just remember not thinking of anything and just playing. When I was playing I forgot that I was on camera, I forgot they were streaming and that anyone was watching. That was when I thought; ‘wow I can really get better’. Just a few months ago I won the J.Pechauer NorthEast Women’s Tour season finale. That was my latest-biggest major accomplishment. It’s an open event tournament; I think 28 of the top females attended, and I won that event, so I’m very proud of that one.

3: Are there any opponents that you have played that stand out?

Yeah, I would say Karen Corr. Every time I played her, especially the first couple times I played her, she just always played perfect and I never had a shot. That always stands out when I see her or when I draw her. I always think about those times.  She is definitely someone I look up to, and every time she plays me she plays me so hard.

4: Do you ever get out and play for fun?

5: Who are your sponsors?

Mezz Cues is my cue sponsor. All the equipment that I play with I get from them. I love all their products. Castle Billiards is, of course, my main sponsor, and has been for many years. I’m always at Castle billiards. It’s my home room. They have put me in a lot of events.  I would like to thank both Castle Billiards and Mezz Cues. As my sponsors they help me out with a lot. It’s been really nice having their support. I used to have Megabucks Amateur Pool League as a main sponsor also, but I haven’t played in there league because of my location. I would like to mention them though, because they have put me in a lot of events.

6: When you’re not playing pool your probably____?

Shopping. Clothes. I have about 4 closets full of clothes. I am a shopaholic. I am not girly when I am playing pool, but outside of the pool world I can be very girly. I change. I also like to keep up on my social life. I have a lot of friends; a lot of good close friends.  I try to go out, and have a nice glass of wine, and chit chat with my friends.

I go to the gym. I actually don’t have enough time to do all the things I want to do, but I try to go to the gym regularly. When I go to the gym; I do a lot of cardio, and I do a lot of exercises on my mat; a lot of core exercises. I feel that my time is so limited, and I have to balance everything out with work and pool. I still play the piano once in a while by myself. And, I’m trying to stay heathy and try to balance my life out. I organize it to include exercise.

Well I’m a very heathy eater. I usually never order fried food. That’s one of my rules. I know it is cliché but I really like salads. I actually make my own salads for lunch.  I try not to eat out as much. But, if I go to eat with my friends (to a nice dinner or a birthday dinner) my favorite thing is steak. I like steak houses. I’m definitely a carnivore. I don’t like it with any sauces. When I go to a steak house, I ask them to just make it simple. For a home cooked meal, I like a good roasted chicken with roasted potatoes, simple. My family always does that when I come over, but it’s a meal I can also cook myself.

9: Has your game taken you to any exotic locations?

I’ve been to the Philippines in 2009. That was the most exotic location. I loved the beaches. They were paradise. It was for a tournament that Dragon Promotions was running there. It was on ESPN-Star Sports in Asia. It was a Scotch doubles, and I was partnered with Mika Immonen. I have actually learned a lot from him on stroke and follow through. He’s a really good nine ball player. He is defiantly capable of winning any tournament, at any time, in the world.

10: Do you prefer a particular table over others?

11: What is your favorite game?

12: What would you say is you’re strong shot?

13: Any part of your game that you feel you have to work on?

Yes. I feel I need to work on a lot of things. “Laughs”, I was watching some of the recorded matches from Sunday (the first Duel of the Dames 1/10/16) just to see what my weakness and my strengths are. When you’re playing you don’t know what you look like, so I like to watch myself from the outside. I used to be a slower player. I have been able to speed up a lot, and been able to get into rhythm. That’s what I do like about my game, but what I need to improve on, I think, I need to get more conservative on my shot selection. A lot of times I get aggressive, because I feel I’m not going to miss. I feel I’m in dead stroke and get aggressive, and sometimes it’s not the best choice.

14: Can you tell us about some of the cues you owned?

My first cue was a Mike Lambros. It had a regular shaft. That’s how I first started playing, with a regular shaft. After the Lambros, I started playing with a Paul Fanelli, another custom cue maker who passed away about five years ago. I was playing with his cue for about a year, a real nice hitting solid cue, but then I ended up giving It to a friend of his who was really close to him who was collecting his cues. Then I picked up the Mezz, and I had to adjust to the low deflection shaft, and it was much easier. I couldn’t believe I was working so hard before that. It definitely helped me with the inside English shots. I don’t have to adjust my aiming right now. I just aim right where I usually aim with center ball, but hit with a left English and it just goes in.

I like a lot of points. If you notice my cue that I am playing with now, it’s black and white with white points (Mezz CP-13SW/W Pro Cue with a WX700 Shaft). I think it looks very pretty. The contrast of the black and white and the points are very sharp. Its 19 ounces. I used to play with a lighter cue, but now the Mezz I have is a 19 and it’s perfect for me. I like Zan tips. I have been playing with them for a while now. They are from Japan. They play very similar like Moori’s. I play the soft tips, and low deflection shafts. I think that low deflection shafts make life much easier. Textured leather wrap; it sticks to my hand and it’s what I like, the softer leathers, and inlays.

16: What type of music do you like to listen to?

I listen to a lot of pop music. I love the new Adele album. I’m really embarrassed to say this, but I think Justin Bieber’s new album is good. “Laughs”, I never thought I would like him, but I think the new album, I have to say, is really good. I go into little funks. There was a time where I was really into jazz, and all I listened to was jazz. Then there was a time I was into classic rock, and that was all I listened to. I am always changing my mind and exploring different things. So, you’re asking me, ‘what’s your favorite thing’, and it’s hard for me to answer, because I’m always exploring. It’s hard for me to stick to one thing.

Mezz case. I carry an extension which is a screw in type, a tip scuffer, a square one for scuffing and shaping, which is very important. I carry a towel, and powder. I’m very simple. I don’t need much. Sometimes, I just bring my cue.

18: Are there any pool players that you admire?

Cat. Every one that knows me knows I’m a cat lady. I’m wearing cat earrings today! I have a cat right now. Her name is Noodles, like the food. “Laughs”. She is adorable.

20: What are your plans for the future?

I’m looking to settle down and have a family. Also continue on in my career in banking, and improve my pool game as well and try to compete in as many tournaments as I can. 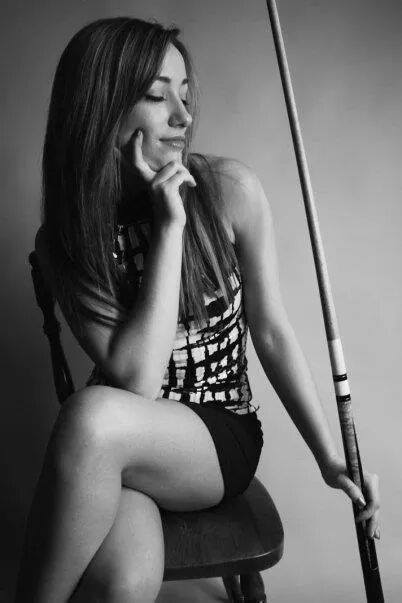 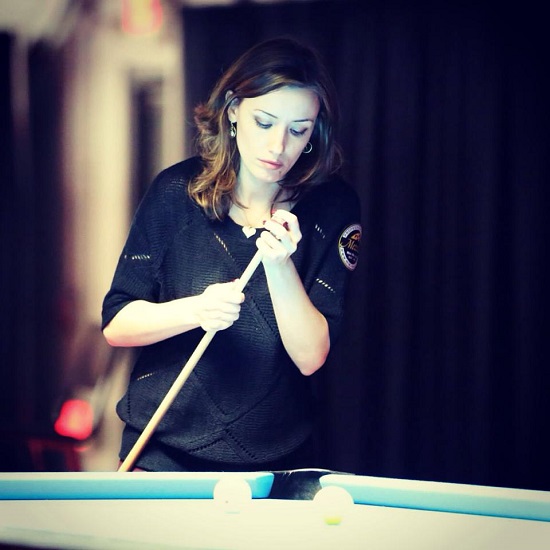 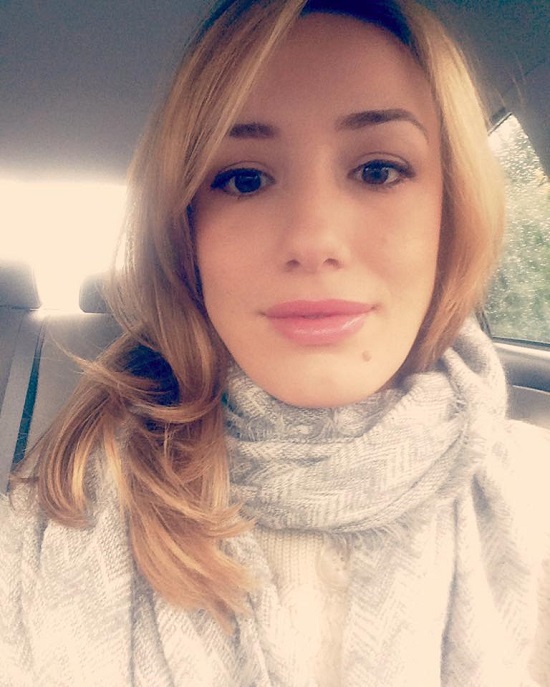 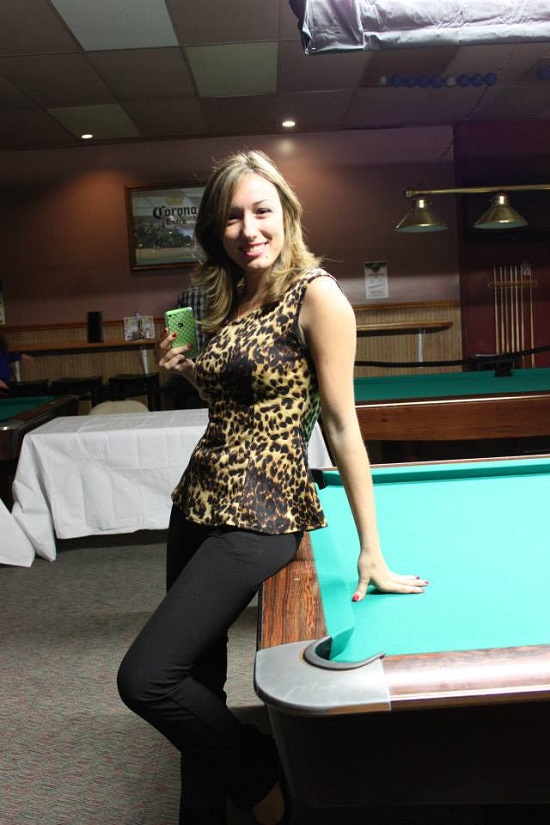 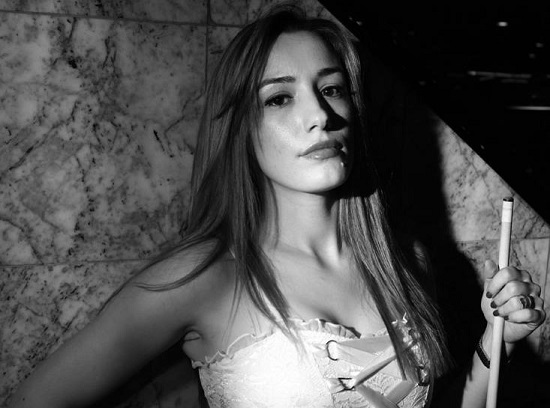 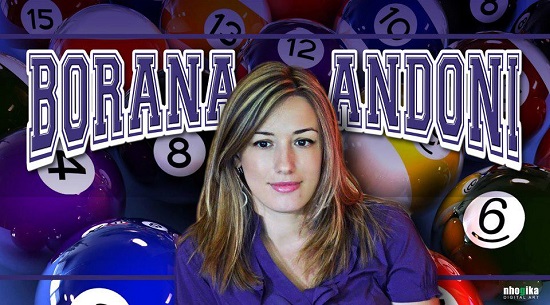 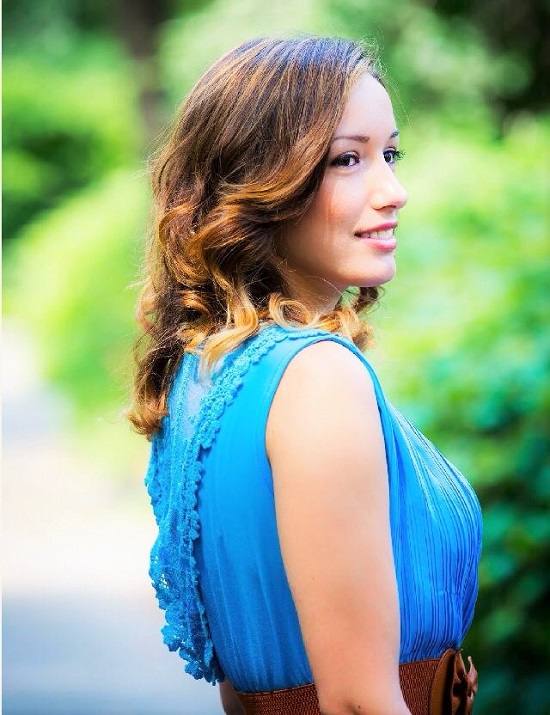 Here are some more pictures of Borana.
Remember that at any time you can pause, skip, or go back to any pictures you like.